In North Carolina shellfish such as clams and oysters have been a staple in our diets for hundreds of years. Today traditional oyster roasts are still popular and there is a growing demand for shellfish in resteraunts across the east coast. 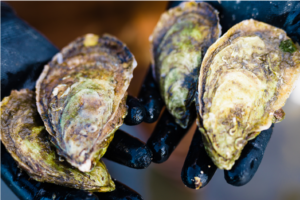 While wild shellfish have been harvested from the coastal waters of North Carolina for hundreds of years, they have also been culltivated. NC has allowed the use of public waters to commercially grow shellfish since 1858, given that the producer has obtained a lease to do so from the N.C. Division of Marine Fisheries Shellfish Lease Program. 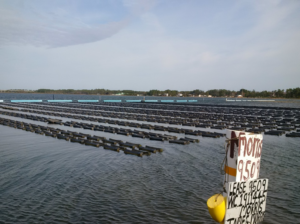 In North Carolina commercial shellfish aquaculture is focased on the cultivation of oysters and clams. Typically, clam seeds are planted on the bottom of the lease in prepared plots and then covered and protected by a mesh covering. Oysters can be cultivated in the same way, by planting oyster shells on the bottom of the lease and then inroducing oyster larve. However many NC Oyster producers have started to grow their oysters in the water column. 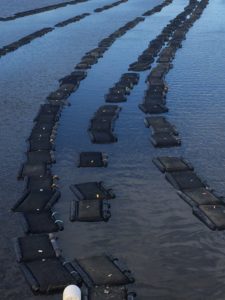 Cultivated Shellfish have many benifites for both the producer and the enviroment around them. Becuase shellfish are filter feeders, when they are cultivated in coastal waters they recieve thier nutrients from the water flowing through the system and so require no additional food. Culltivated shellfish cannot be over harvested and relieve pressure on wild shellfish populations.

In 2016 the United States produced 36.6 million pounds of oysters (including Eastern oysters), valued at $192 million. In 2017, the commercial value of cultivated North Carolina oysters was nearly $2 million, while cultivated clams were valued at about $200,000. Matriculture in NC is expected to grow to $100 million, with a gate value of $33 million by 2030. 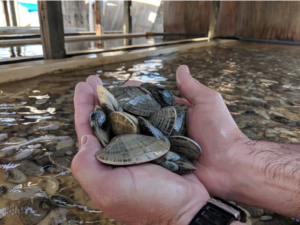 SRAC 0432: The Cultivation of American Oysters

SRAC 4300: Extensive Culture of Crassostrea virginica in the Gulf of Mexico Region

SRAC 4308: Off-Bottom Culture of Oysters in the Gulf of Mexico

State of the Oyster: Progess Report

SRAC 0433: Biology and Culture of the Hard Clam (Mercenaria mercenaria)